Broadcast Radio: Owning its Place in the Tech World

The radio industry needs to “own” a unique technology. Google owns search. Wireless companies own the mobile subscriber. Facebook rules the social platform. Apple dominates the app and music store. Pandora is the go-to for user-programmed streaming. As an industry, radio by revenue and consumer consumption should by all accounts own something in the technology sector. While many can successfully debate that radio owns the local advertising market and in-car listening time, those are not technology driven growth opportunities. Those outside of radio, and a few naysayers inside radio, debate that radio has a place in the future at all.

Radio broadcasters can make hybrid, interactive radio on smartphones the technology that consumers look to as the reinvention of local broadcast radio. NextRadio, the only hybrid FM app available, can be the ultimate hyper-local platform with mass market local radio stations using calls-to-action and thousands of local sellers to own mobile advertising and the growing mobile ad market. Consumers can benefit from enhanced content on the radio dial, efficiency of FM radio (more handset battery life, lower data bills) and most importantly, keep radio at their fingertips in times of emergency.

So, in this changing media and technological landscape where the mercurial consumer bounces between seemingly endless apps and choices, what unique offering can radio provide? Hybrid radio is the term being used ubiquitously to describe a melding of one-way technology (like broadcast radio) with two-way technology (like mobile broadband). Traditional broadcast radio is the most efficient way to reach the mass market with entertainment and information. Two-way technology may be better at direct one-to-one engagement with the consumer, but is not the best solution to deliver mass-market content for technical and economic reasons. When we launched NextRadio for FM smartphones and connected cars, our creative intent was to visualize the value of FM radio as localism, calls-to-action and well programmed radio stations to translate the strongest relationship elements into a system that would automatically link to the two-way smartphone. “Hey listeners, call this number, text-to-win, attend our promo event, go to this website!” Simplicity is extremely difficult but if you look at what Google, Apple, Twitter and others “own,” they keep it simple, and I think we have achieved something similar with NextRadio. 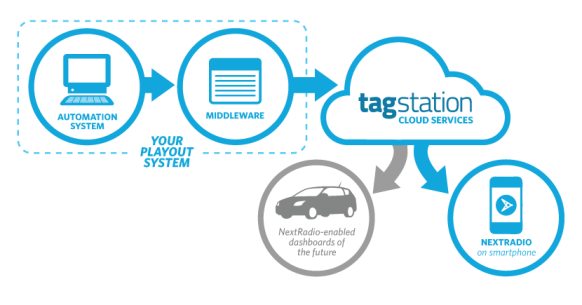 People listen to local radio. The numbers show that. In a recent focus group performed by Coleman Insights, NextRadio on an HTC One Red smartphone was put in the hands of people of all ages and genders. Two reactions were common. “Wow, this is cool.” What?! Radio IS cool. In this world of Twitter, Snapchat and Angry Birds, “This is cool” is exactly what you need to hear from this generation. The second reaction was, “Huh, I didn’t know I could listen to FM radio outside my car.”  If you are a broadcaster you should be swallowing a big lump right about now. Usage curves of FM radio show morning drive and afternoon drive as the times people listen to radio in the car. If we want to sustain and grow the broadcast radio industry, we must make radio cool again and educate listeners on its availability outside the car.

NextRadio launched with Sprint in August of 2013. One phone, the HTC One, was our soft launch and this was our opportunity to work out the prototypical system bugs. By Black Friday 2013, we had five more smartphones to launch and about the time people started unwrapping their Christmas gifts our install rates and listening became a hockey stick curve. NextRadio now has over 400,000 activated users and is growing daily. FM radio is preloaded on 15 Sprint, Boost and Virgin Mobile phones. Over 30 models will be FM-enabled and commercially available by the end of this year, and tablet development is in progress. What does this mean for incremental FM listening, assuming people would otherwise be listening to streaming music on their smartphone? The first quarter of 2014 saw month-over-month listening grow an average of 56 percent. And, those smartphone listeners are listening primarily between 10 a.m. and 3 p.m., outside of their car!

Looking at the current forecasts for FM-enabled smartphone sales of 3-5 million units in Q2 2014, we expect by mid-year 2014 to have at least 5 million FM-enabled smartphones in the hands of consumers and continuing to grow. Broadcasters need to care a lot about this evolution. Why? Because the first time that consumer launches NextRadio and hears local FM radio, they will make a choice instantly to either continue using FM radio on their smartphone or switch to an internet-friendly, visual alternative. Broadcasters can use a tool like TagStation to create an experience that radio can own. This is how the radio industry looks to the future: by blending what we are great at with what the consumer expects in today’s tech heavy world.

Lastly, but most importantly, is the public service aspect of FM in smartphones. My parents live in rural southern Indiana. Recently, tornadoes and 120 mph winds hit their town. The house of my 75+ year old parents was damaged and they were without power for three days. Mom had switched to a smartphone some time ago to be part of the texting and picture sharing world of grandchildren. However, in the event of the storm and soon after, I could not reach her on the phone. As day two and three wore on, my mom and dad needed help so my sister drove out to them. My parents had naturally turned to radio and TV for help, yet neither was available. Yes, I had told my mom to get a Sprint phone, but she is a Verizon customer. Maybe I can change that based on this emergency. The moral of the story is: radio is a lifeline to people in emergencies to give them comfort and much needed information. FM-enabled smartphones can be one way of helping people in times of need, especially when other resources are not available.

Radio can truly own something unique with NextRadio. Consumers will benefit from interactive FM-enabled smartphones, and in an emergency when people need a lifeline for information, the FM radio will be the distribution platform most likely to be there for them. Make your radio stations interactive for NextRadio, promote the value to your listeners, and in the words of David Pogue at the 2014 NAB Show, stand on the mountain top and tell everyone about NextRadio.

View all posts by NAB